Q is a terrible letter and I've already used Queen so this was the only thing I could think of that would be remotely interesting. I've already mentioned a lot about my 'quest' so far in my first post but perhaps this will be more of an update.

Looking more into Hellenismos and its rituals and structure has been a nice introduction into Reconstructionism, even if I don't fully agree with all of its points. After reading A Beginner's Guide to Hellenismos I've tried to put more of a foundation on my beliefs. I re-decorated my altar, which had become more of a shelf for knick knacks over the last year or so more than anything else. 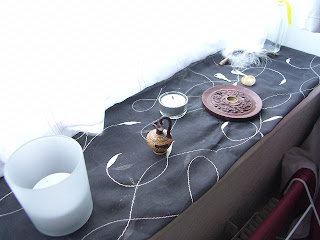 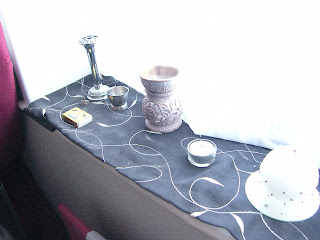 I have my hearth light for Hestia (an electric candle in the glass holder.) The round candle next to it holds a real flame for during offerings and prayers. The oil burner is a safe place to burn cone incense as an offering, the wooden disk holds joss sticks. The candle stick on the left belonged to my great grandmother and the egg cup holds some of my grandmother's rings and this is my small section in honour of my ancestors. The small dragon ring which you probably can't see represents the serpent of the Agathos Daimon.

Also on the right, I have a small representation of a Greek urn I bought while on my trip to Greece. It's a small touristy thing but I think it connects me to the homeland of Hellenismos as a whole. The keys represent Hekate, the citrine stone represents Apollon (with his connection to the sun and enlightenment) and the feathers represent Hermes in their household epithets.

So it's small and simple and I would really like some proper statues on there but it's something I make do for now. I also have a metal bowl I use for my khernips but that lives under the bed instead.

I'm following a lot of others who lean towards Hellenismos and there's a considerable amount of newbie feeling all over again but we all have to start somewhere and they are excellent people to learn from, even if I'm just reading their blogs. There is that backbone to the core practise however, the ancient texts that can be used as a solid basis, though this doesn't necessarily discount UPG.

As far as contact with the gods goes, I haven't had anything in depth occur but just the general worship of them all is grounding.
Posted by Jezz at 17:51