Seeing as I'm focusing on the Greek pantheon, this would of be Hera. (Ἡρη)

Sister and wife of Zeus, she is the patron of women and marriage, goddess of the sky and starry heavens. Her most well known myths are her involvement with the beauty contest judged by Paris, she offered to make him the king of all men but he found Aphrodite's offer of the most beautiful woman most appealing and we all know what happened after that.

She helped Jason and his Argonauts through the dangerous sea trials of Skylla and Kharibdis, the Clashing Rocks on their journey to claim the Golden Fleece. 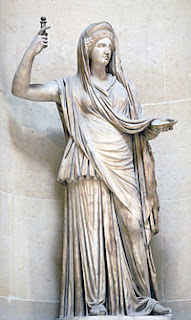 Though I think MOST famously Hera is known for her jealous rages against the offspring and lovers of her husband (not that she can be blamed really) even for a goddess it must be rough to have a husband with such a prolific wandering eye. To name a few of the ladies, Leto (mother of Artemis & Apollon), Semele and Alkmene and their offspring like Herakles and Dionysos.

Zeus and Hera do have children of their own, Hebe, Ares and Eileithyia. Arthur Bernard Clark argues that Hebe was fathered by a lettuce and Ares by a special flower and I'm not exactly sure where he got those assumptions from but it sounds questionable.

Hera also conceived Hephaestus completely on her own, jealous over Zeus' solo birth of Athena. The smithy god was either lamed from birth however, or lamed when Hera cast him down from Olympos depending on which source you read. She also birthed the monstrous Typhon (at least in the Homeric Hymns) without a male's involvement. Would this be some social commentary on the abilities of a woman when compared in the same task as a man? Athena is a whole, powerful goddess of war and wisdom meanwhile Hephastus is lamed by a physical deformity making him perhaps lesser in some regards and Typhon is discribed as a monster. The Ancient Greeks were a little sexist so it could be possible.

Personally I've never spoken to anyone who has had personal dealings with Hera but I wouldn't want to offend her if I could help it.
Posted by Jezz at 21:18